Well, the month of May has been a busy for the DTCC Youth road and track riders. We have gone from having no events to being flat out. It’s good to be back racing!

The first trip away from Knockburn was the RACE National training session at Lochgelly on 16th May where we had 8 riders attending. This was a four hour session giving riders the opportunity to work on tight group riding skills and race simulation. The sun even shone for us – most unusual. 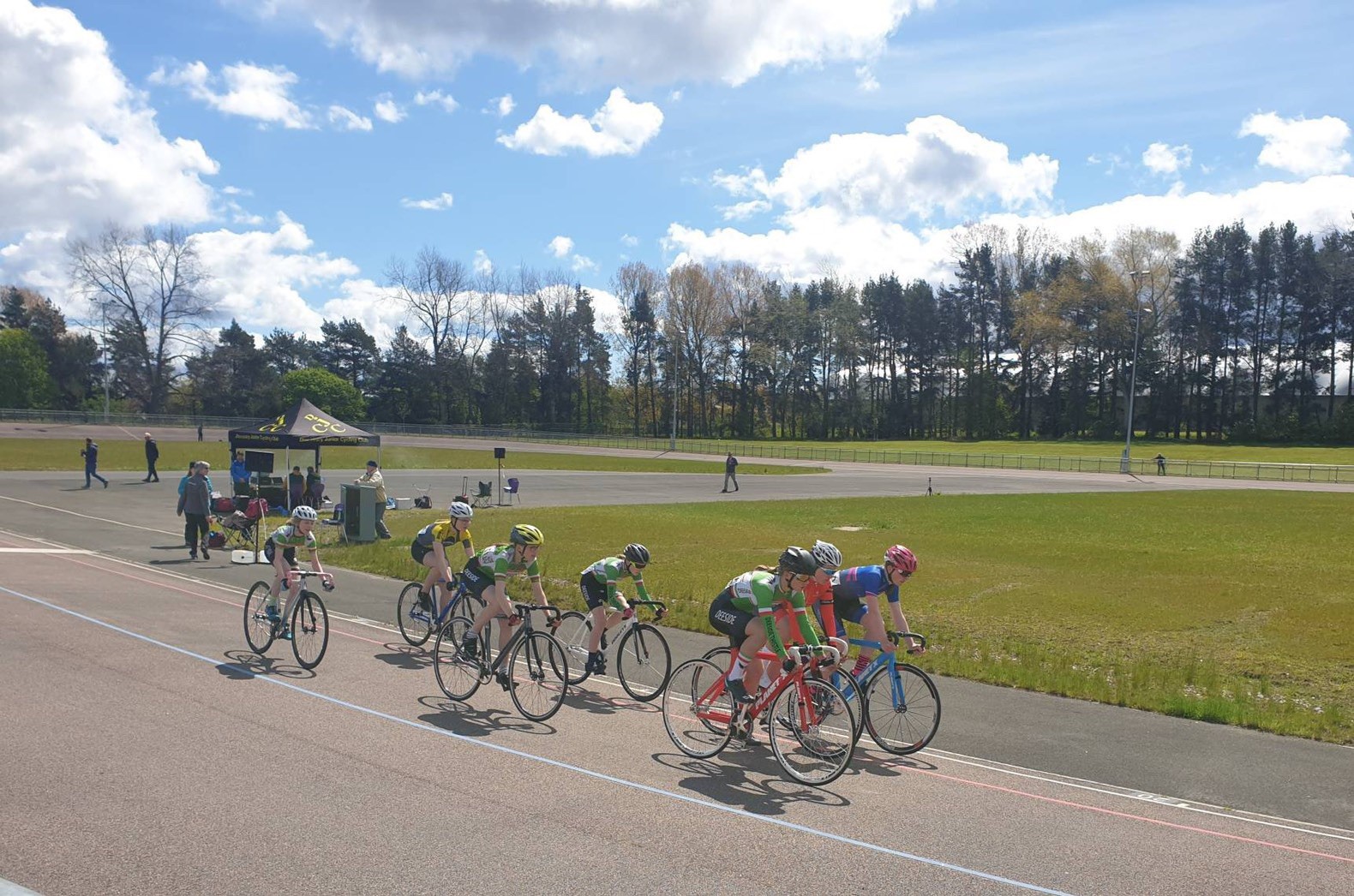 On Thursday 20th May the first “event” took place at Lochgelly – this was the first round of the Spokes Summer Crit Series. The weather wasn’t kind and it was a wet and chilly evening. Arabella and Elliot took the wins in their respective Youth B girls and Youth A boys races giving them the honour of winning the first youth road events in Scotland since the pandemic disrupted racing. Erin raced as a Junior in with the Senior women and finished in 10th place. Jacob rode his first race and took a creditable 5th place in the Senior Cat 3/4 event having done well to stay around the front of the race throughout. Alexander raced well in the fast E/1/2 race with the big burly men.

Next up came the first round of the British Cycling National Youth Omnium Series held at Dundee track and organised by DTCC. Simon Small and his team put on a spectacular event with meticulous planning to ensure the event met all the necessary Covid requirements and protocols. This is the first track event organised by DTCC Youth and Simon did the club proud – a big thank you to him. The racing matched the organisation, and the club was represented by 10 DTCC riders. We had 4 Youth B girls with Arabella taking the win, 3 Youth A girls with Evie taking second and Millie third. Archie, Elliot and Isaac all raced well in the fast and furious Youth A boy’s race with riders coming up from England to stir things up. Well done to all – a great effort despite no track racing (or riding) for about 15 months!!

It was then on to round 2 of the Spokes Summer Series where the club was represented by the same 5 riders as round one. This time the sun shone, and it was warm – it was still rather windy but that is to be expected at Lochgelly! Arabella continued to dominate and won her race again with Elliot taking second place in his. Jacob came in 5th place again in the 3/4 race and Erin in 11th place in the Women’s event. Alexander rode a great race in the E/1/2 event and took 5th place in another fast race.

On Monday 31st (another day off school) six DTCC Youth riders travelled to Loughborough University for the first round of the British Cycling National Youth Series. Scorching weather and a fast technical course resulted in a fantastic day of racing. Arabella started the day off well by winning the U14 girl’s race – she was dominant from the beginning. Thea and Hope also raced and finished a well-deserved 15th and 18th respectively in their first British Series event. Next up was the U16 girls race with considerably more riders and this race was fast from the gun. Evie fought hard and finished 21st with Millie coming in 48th after being delayed by a crash. The final youth race of the day was the U16 boys race which was contested by 80 testosterone fuelled boys (150 boys entered this race) eager to race hard. The race started fast and never let up with it being split into groups all around the course. Elliot finished in the second group in 14th place. This was followed by a long drive home!